Celebrate wins:you will excel, even surprising yourself at times;make sure you celebrate it. (Image mine)

My house is in order!
I shout to a cosmos
intent on ignoring my pleas

no barriers to protect
when soul mocks
purported equilibrium

Order, spirit answers,
is a temporal concept;
continue to grow.

Creativity’s
an eight-legged
life-sized terror,
has me cornered –
those menacing eyes
and crushing mandibles
paralyzingly frightful –
about to be consumed,
I throw her some cheese.

I cope, cook up
breezes, strike
wet ground,
stuff myself
to satiate
the onslaught

Look for
God, but my
cup keeps moving –
I am unreachable,
charmed by
a broken tale

aimless,
oppositional,
overwhelmed –
cry out but
absence holds
no listeners

sleep offers
no repair
alone
tormented
by the issue
at hand. 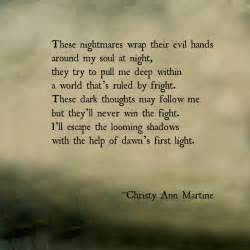 (Note:  Inspiration for my poetry is derived from the Dreamtime.  Occasionally, a nightmare will evoke the creation of a short story.  A recent nightmare continues to haunt me, so I have attempted both forms of literature to garner new meaning.  The poem follows and the prose version can be seen here.  Which form offers more insights I wonder?  objectivity in the form of comments appreciated.

Logic has no tolerance
for the undefined,
ghosts off-limits

Is disease the culprit,
inflammation upsetting
equilibrium, a mind aflame?

I know you are there!
Show yourself!
Stillness.

These are merely games
one reality pit against
another, neither winning

A feminine figure emerges –
her presence emitting an aura
of alarm, indicates a window

Delusion, one last prayer for sanity
but the floorboards recede, reveal
skeletons, there is no escape

Unmarked routes, out of sight,
use the innocence of landscape
to blot out their dark intentions

The roads still exist in my dreams
the trees like soldiers, stiff and stark
stripped of their magical allure, now

guard the memories, painted red
with the loss of purity; I had not
guessed the danger of woods

stains forever etched in silhouette
the shrillness of their screams
now silent echoes in the night.