Backyard BBQs and picnics in the park – perfect ways to build community. The children benefit the most, I’d say. For Lens-Artists Photo Challenge: motion 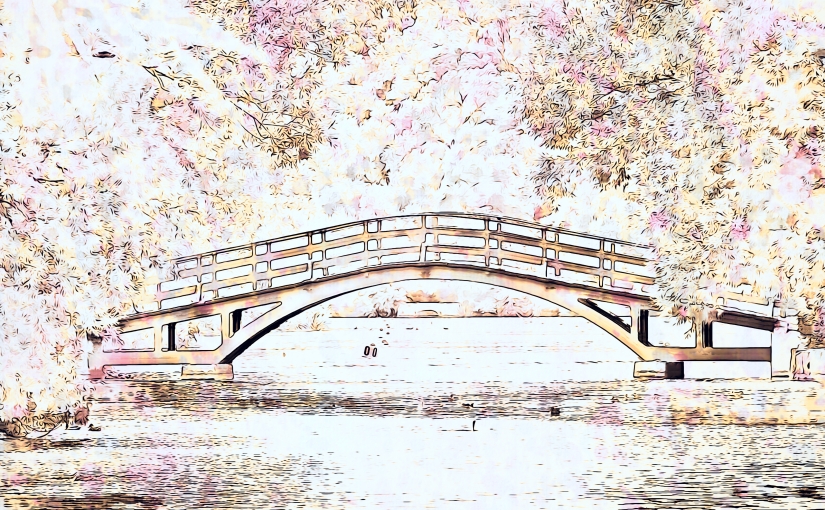 Connections, like bridges,
run between us –
no matter how subtle –
nations and individuals,
there is no divide…

Imagine if we acted
in this knowledge –
mindful and kind –
not so subtle the outcome,
I should think.

Reposting this for my weekly challenge with the theme of river.

There’s a river runs between us,
you and I; our thoughts, like tears,
are liquid carried by the current.

But you, and I,
we stand on the banks, oblivious,
ignoring the connection,
proudly touting our individualism.

Still the river flows
and all you’ve suffered
and all I’ve suffered
or dreamed, or imagined, or hoped
flows with it.

Step into the water with me,
feel our connection;
do not be afraid
for it is sacred –

wade deeper and know
you are not alone
for I am here
in this river
that runs between us. How delicate
these threads
that bind us –
frail filaments,
whispery darts
of affection –

There’s a river runs between us,
you and I; our thoughts, like tears,
are liquid carried by the current.

But you, and I,
we stand on the banks, oblivious,
ignoring the connection,
proudly touting our individualism.

Still the river flows
and all you’ve suffered
and all I’ve suffered
or dreamed, or imagined, or hoped
flows with it.

Step into the water with me,
feel our connection;
do not be afraid
for it is sacred –

wade deeper and know
you are not alone
for I am here
in this river
that runs between us.

“Let’s start by completing this reading and writing survey,” I suggested to the tall, lanky young man who had recently been placed in my care. Uncertain as to whether or not he had any literacy skills, I offered to read over the lists with him. “We’ll place a check mark beside any or all that apply.”

“Sure thing, Mrs. E.” Mark gave me that charming smile that he was famous for. Although his criminal record was longer than his academic one, Mark was a very likeable young man.

“Which of the following do you read? Magazines?”

“I’d have to agree. Letters? This must be an old list….” I started to apologize.

“Oh no! I read letters all the time.”

“You do?” I couldn’t even remember the last time I’d received a letter. “Who writes to you?”

“Do you write back to him?”

“Of course. We’re tight, Ace and me. He’s like a brother. I’ve known Ace since we was kids.”

Good to know. Mark has literacy skills. I checked off letters under the writing column.

Hovering over the journal box, I asked if he ever wrote a diary or journal.

“I’d like to,” Mark said, “but who would ever want to read what I have to write.”

It was the opening I needed to hook Mark into learning. I was charged with helping Mark obtain a credit in English and Math. Math was easy, as he liked the subject and demonstrated a natural ability; so English was the challenge. We decided that Mark would read a memoir and I would construct relevant writing exercises that would form the basis for Mark’s own personal blog / journal. Mark and I were both excited about the prospect.

What ensued were many hours of heart to heart talks. Mark, the youngest child of a broken home, had been left to his own devices at an early age. He stop attending school in the seventh grade and quickly began to wander with a rough crowd. He confessed that he really did want to turn his life around, but that he didn’t know how. I advised him that while change was possible it would be hard, and might mean a purging of relationships.

“My boys are my family, Mrs. E.” he explained. “Whenever I’ve needed anything, they are the ones I turn to.”

I understood, but I also knew that if Mark was to truly make changes, his friends would have to go.

“Ace is isn’t really his name, you know,” Mark said to me one day out of the blue. “It’s his gang handle. I have one too.”

“You know, Mark, if you sat your gang down, individually, and asked them whether or not they’d like to change their lives, I suspect half would say they did and the other half would be sociopaths.”

“You are right about that, Mrs. E. Take Ace for instance. He comes from a good home; his mom is a professional, and quite successful. His dad is never around, which was part of the problem, but his stepdad’s a good head. He just got off on the wrong foot because of his colour.”

As Mark continued to talk, Ace’s story began to sound all too familiar.

“Wait a minute, Mark. I think I know Ace…or his mother at least.”

He told me Ace’s name and my heart sunk. “I knew Ace as a young man. I knew his mother very well, and admire her deeply. Next time you write to Ace, you let him know I’m thinking about him, and his family.”

I left school that day with a very heavy heart, my last conversation with Ace’s mother echoing through my mind.

“I don’t know what to do,” she cried into the phone. “The police just won’t leave him alone. It’s racial profiling.”

I couldn’t believe what she was saying to me. I didn’t want to. Our city, in these times, capable of racial profiling. That didn’t happen in Canada, did it?

I didn’t hear from my dear friend again after that conversation. Our lives took on different directions, and even though I dropped her a line years later, she didn’t respond. I was beginning to understand why. Her baby was in jail doing time for assault.

Somehow, I believed him. But the story continues to haunt me all the same. Could I have done something different?
Did I let my friend down in her time of need because of my own ignorance.

One thing I know for certain: the world is made up of many interconnecting circles, and sooner or later, what we’ve left behind will catch up with us in one way or another.

Learn from me: Take care of each other in the moment. You don’t know how far-reaching your actions will be. 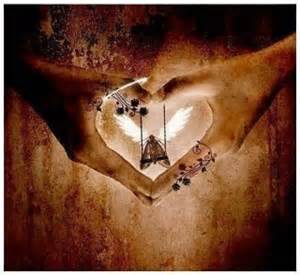 The forest is thick with the smell of new leaves, tinged with the lingering winter musk.  The trees here stretch endlessly upwards, their trunks a testimony to the timelessness of the place.  Rays of warm sunlight reach downwards, creating pockets of warm glow.  The soft moss and dry earth beneath my feet cushion my steps.  Birdsong fills the air, adding to the aura of enchantment.  I come here to meditate.  This is my oasis:  a calm, nurturing retreat where I can find renewal.  I breathe deeply and allow all my senses to revel in the beauty.   A crackling of twigs alerts me to the presence of another.  A horse and rider come into my line of vision and stop.  The young man’s eyes meet mine, and there is a rush of recognition.  He is young, maybe mid twenties, with thick dark hair, and dark eyes.  I feel that I have known him many lifetimes, and that ours has been a relationship of deep and abiding love.  “I am coming back to you,” is all he says, and I feel my heart leap with joy.

The unexpected vision and accompanying emotional surge forces me back to consciousness.  The meditation had been so deep and relaxing that it find it hard to shake off the drowsiness.  It was so real.  I open my eyes to find my friend, Sam looking at me.  “It’s a boy!”  I blurt out.  “You’re going to have a boy!”

I was right about the boy, but the message was not for my friend who was so desperately hoping for a child.  It was for me, who although I thought I was finished my childbearing, was about to discover myself pregnant again.  My dark haired, brown-eyed boy was born the next fall.

Mothers know that there is an unseen cord of consciousness that runs between them and their children.  It is first experienced when they wake up seconds before their sleeping baby.  Or maybe earlier, in the dream time.