My first impression of Sherry was “Stepford Wife”.  A tall, thin, blonde, Sherry appeared to be the perfect wife and mother.  The stones in her garden coordinated with the ruffled awning above her front door, and accented her meticulously manicured lawn and flower bed.  Inside was no different:  her floors shone spotlessly, despite the presence of three children; and a smell of fresh baking wafted through the air.  Even though my visit was impromptu, Sherry was dressed stylishly in a crisp white blouse, and form-fitting skirt, complete with heels, and suitable accessories.  I was immediately intimidated.

My next visit to her home, this time invited, revealed much the same.

Sherry’s husband, Rob, was equally as impressive.  Also tall and thin, Rob was a quiet intellectual, who stayed fit by running marathons, and coaching his boys’ soccer teams.  He seemed to take his wife’s efficiencies into stride, and like her, was unruffled by his rambunctious young family.

Sherry and Rob soon became part of a social circle:  a group of ten couples that met once a month for dinners, cards, and sometimes, social outings.  They fit right in.  Once a year, we would all gather with our children for a large barbeque and fireworks.   Life was good.

I knew something was wrong the minute I stepped in the door by the state of disarray in the house.  Sherry’s six-year-old daughter let me in.  She appeared frightened and withdrawn.

She led me through the house to the kitchen, where Sherry sat crumpled in a chair, head down on the table, hair matted, and smudges of makeup streaking her face.

“He left me.”  She didn’t even look up.  Her voice, flat and lifeless, spoke volumes.

I spotted her two boys in the adjacent room, watching television.  I could see them glancing our way anxiously.  Please help!  their eyes pleaded.

I reached for the kettle.  “Have you eaten yet today?”  Telltale signs of kids preparing their own food and abandoning the dishes suggested she hadn’t.

I made her tea and toast and put it before her, and encouraged the children to go out and play.  Relieved, they complied.    “Tell me what’s going on.”

“He left me for another woman.”

I was stunned.  “Honey, try to eat something, and let me help you.”

She sat up, staring at the offering before her with complete disinterest.  She pushed the plate away, and cradling the cup, took one tiny sip, then pushed that away too.  Her normally thin frame appeared gaunt.

Rob had had an affair three years earlier with a woman from work.  When Sherry found out about it, Rob ended the affair and he and Sherry entered marriage counselling.  She had tried really hard to be the perfect wife and mother, so that he would love her again, and thought everything was going well, but out of the blue, he left.  He was now living with his mistress.

Sherry’s heartbreak was so intense, it threatened her life. Within weeks she was hospitalized because of severe malnutrition.

It was hard not to sympathize with her situation and write Rob off as a total jerk, but as always, there is another side to every story.

“I reached the end of my rope,”  Rob explained.  I love my wife, and I adore my children, but living in a constant state of perfection is exhausting.  Sherry has to be the best at everything, have the best house, wear the best clothes, everything is about impressing others.  There is nothing genuine about her, about us.  She is incapable of authenticity.  I tried to stay for the children’s sake, but I just couldn’t do it anymore.  I am dying inside.”

“So you left for another woman.”  I couldn’t keep the edge out of my voice.  I am, after all, a woman.

I wanted to understand.  I wanted to know what would drive one person to put his/ her family through so much pain.

“When two people divorce,”  a colleague told me, “there are always three truths:  his, hers, and a truth that lies beyond their stories.”

I tried to stay impartial, but supportive, and as I did, I began to realize the wisdom in my colleague’s words.  Once released from the hospital, Sherry became a woman obsessed.  She stalked her husband and his new lover, both at their home, and their places of work.  She was determined to get Rob back, and refused to see the folly of her actions.

On his part, Rob became more and more enraged, and retaliated with acts of violence against Sherry.

The scene was escalating out of control, until Rob’s therapist broke the pledge of confidentiality and advised Sherry her life was in danger if she didn’t back off.

Sherry did eventually let go of Rob, but only to rush head long into a tempestuous affair, with no regard for her children.  Rob withdrew from his former life, avoiding his friends, and maintaining minimal contact with his children.

Who was right, and who was wrong in this tale?  Like many conflicts, there are too many grey areas to tell for certain. Both his and her story made compelling arguments, but the real truth laid somewhere beyond all our comprehension.

One thing was certain, though:  the real victims here were the children.

O in the Middle 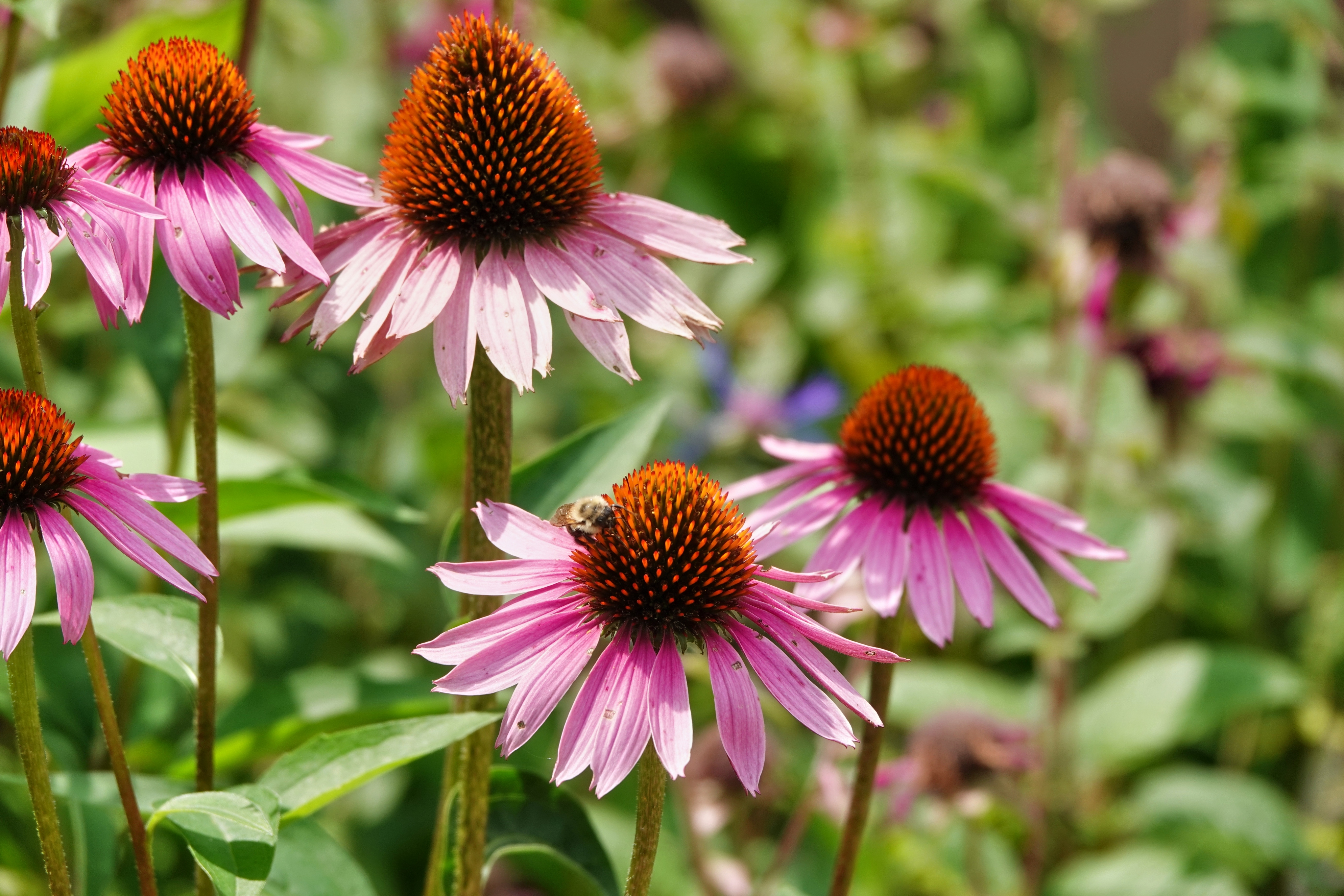 Cone flowers, motorcycles on the road, and shops For Cee’s Midweek Madness Challenge: photos topics with ‘o’ in the middle.